It was a typical summer mid-afternoon day in Oakland. The weather was typically moderate and the sky was typically large and beautiful and we were outside typically playing, running, laughing, arguing, and riding our bikes between games of street football, baseball, and roughhousing.

Mom was inside doing who knows what, but she was probably reading. She enjoyed her quiet time when my brothers and I were all outside.

I was “going deep” for a “bomb” – a football term for running far to catch the thrown football – when I noticed mom was sitting on the porch. It wasn’t often she was outside watching us play.

But today she was.

I wasn’t certain how long she’d been sitting there watching us, but as soon as I noticed I tried to run faster, catch more balls, and do whatever I could to impress her. I told myself, after I’d caught one really hard thrown and harder to catch ball, that mom was impressed by how good I was.

After a few more catches I decided to see how mom was doing as she sat on the porch.

What are you doing out here? You see how good I am? I can run faster than anyone, even the older kids, did you notice?

She just laughed and agreed that I was very good – in that mom way that’s honest, not condescending, and with just enough proud tones that one instantly swells up inside.

What are you going to do next, mom asked?

Ride our bikes and practice popping wheelies, I replied. There were three bikes on the block and about 8 kids who rode them. No one really owned them because they were community property and everyone accepted that simple fact.

I never learned to ride a bike, mom said.

What? You can’t ride a bike?! Yes you can, you’re just teasing me! Hey, I yelled out the other kids and my brothers. My mom don’t know how to ride a bike!!

They laughed and mom laughed too, saying she didn’t have a bike as a kid and never really learned. And besides, she was scared she’d fall on her face.

We laughed for a few minutes before I tried explaining to her how easy bike riding is and how you just jump on and go – that was the extent of my understanding of how one rides a bike.

Then it hit me: I’d teach her.

Mom protested and said no, and that there was no way she’d get on a bike now at her age.

I persisted though, and I would not accept mom’s excuses. I told her she was just scared and there was no way she’d get hurt because I’d be right there!

And she did agree, after about fifteen minutes of me pleading, begging, and begging some more.

I quickly ran to get one of the bikes – I picked the the one I thought would be easiest to learn on – I didn’t tell mom that fact – and rode it over to her.

Mom climbed on and said: what do I do?

I just laughed and replied, nothing yet. I’m going to roll you to the street.

Then I explained that she just needed to sit up with a slight lean forward, hold the handlebar steady and I was going to start pushing her. Once I start pushing, I said, you start pedaling.

My reply was serious and firm – as much I could be with her as a ten year old – and I said, mom, don’t worry. I will be right here with you and I will run alongside you until you get your balance. I won’t let you fall.

I was nervous but I didn’t tell her that.

I started rolling mom and the bike, slowly at first, before gradually picking up speed. Mom was all smiles and screaming. At the top of her lungs. She was screaming with joy and excitement.

Also, we were barely moving.

Then I pushed harder and we began picking up speed. And mom’s feet pedalled right off the pedals and her feet were sticking straight out on either side of the bike as I pushed her faster and faster, and as she continued screaming.

I screamed back: MOM! Put your feet back on the pedals!

PUT YOUR FEET BACK ON THE PEDALS! I screamed over and over, as the other kids laughed and screamed the same thing.

Finally mom got her feet back on the pedals and started pedalling. She was ready, I thought.

So I gradually and slowly let go of the back of the bike, where I had been helping steady mom until she got enough speed and in control of her balance.

“Don’t let go! MYRON, DON’T YOU DARE LET ME GO! She screamed. But it was too late, I had let go and ran to catch up to her.

She quickly glanced at me and her eyes were huge. It hit her. She was riding a bike.

I told you you could do it mom! I told you!

Mom rode on a past a few more houses before she started to slow down and I ran to help her stop. She was breathing hard, and smiling ear to ear. Her hair was messy and she may have had a sweat bead or two on her forehead.

Mom asked me to help her turn around, so I did and she rode back down the street and stopped, on her own this time, in front of our home. She got off the bike and we stood around laughing and talking about the ride, her screaming, and her feet sticking out.

We told her next we’d like to teach her to ride a skateboard. And mom tried that, too, but she wasn’t too good at it though she had fun, and we had fun playing with her.

She went in the house shortly after playing on the skateboard. I don’t think I ever saw mom have so much unconstrained joy and fun, so much laughter outdoors, and so much excitement playing with her kids and the neighborhood kids. 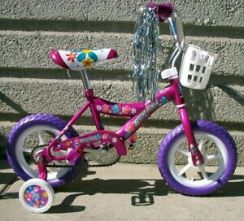 Leah is five years old and has a new purple bike. I’ve taken the training wheels off because she said she’s a big girl and doesn’t need them. She’s afraid but being brave.

Leah was on her bike and saying she was ready.  I gently pushed her at first before we began picking up speed. And Leah’s feet pedalled right off the pedals and her feet were sticking straight out on either side of the bike.

Leah got her balance and I let her go.

“Don’t let go! DADDY, DON’T LET GO! She screamed. But it was too late, I had let go and ran to catch up to her.

She quickly glanced at me and her eyes were huge. It hit her. She was riding a bike.

I told you you could do it Leah!