Trick or Treating was a success! The girls turned off the front porch lights and all the Halloween lights and prepared to inventory the spoils of the night’s events.

Leah was first, emptying her bright pumpkin candy container onto the carpet, spilling out a colorful array of sweet confections and the occasional mini candy bars and the ever more rare and coveted full-sized candy bar.

Beanie, Dunya, and Zoey followed and soon the carpet in the center of the large living room was just a mound of candy, much of which would not make it to sunrise.

“Gimme all your sugar straws,” Beanie said through a mouth already full of the sweet colorful sugar from what must have been her fifth straw tonight.

“Beanie! Girl, slow down!” Dunya said, as she threw a straw at toward Beanie. Beanie scooped it up and added it to her growing pile.

“Now you give me all your hard candy,” Dunya said. She was quickly amassing an impressive pile of hard candy that the other girls didn’t want. 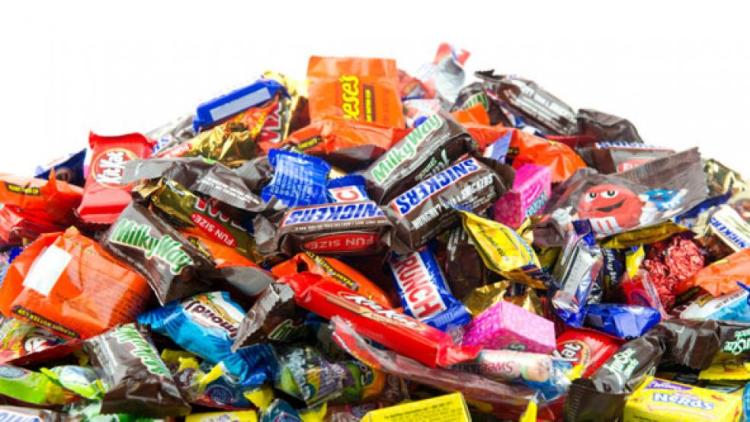 “Chocolate. All of it. Now….” was all Leah said. Soon chocolate was headed her way.

“Gummies and other squishy stuff, pronto!” Zoey said, through the mad scramble of moving candy parts that was blur of colors, wrappers, and smacking and laughing.

“Here Beanie, you can also have all the raisins” Leah said to protestations, disgust, and laughter.

“Leah, where should we put all the extra candy that we won’t eat?” Zoey asked.

“Just go to the laundry room where we keep the extra grocery bags. There are hundreds of them because we never remember to take them to the store.”

“Okay” Zoey replied as she quickly walked through the kitchen and into the laundry room. 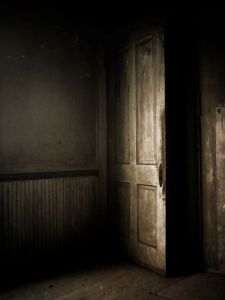 “Ugh.” Zoey grunted as she tried to turn the light on and finding out it didn’t work. “I should have turned the kitchen light on.” Zoey mumbled.

The distant sounds of her friends were quieter now. The back of the house was dark and with the light out, Zoey felt a tinge of fear.

“What am I scared of? Oh my god, my dumb imagination.” Zoey said, trying to reassure herself despite feeling more unsettled.

Zoey walked past the washer and dryer, and straight toward the basement door.

“Crinkle…crinkle…..crinkle” a quiet sound made in the darkness.

Zoey tilted her head trying to identify the sound and pinpoint its location.

“Crinkle…crinkle….. crinkle…” The sound was a little louder now.

“Leah?” Zoey whispered in the darkness and toward the basement door, incorrectly thinking that was the origin of the now disturbing sound.

Zoey took a step closer to the basement door.

The blaring sound startled and terrified Zoey and she screamed: “AHHHHHHHHH” Then she backed up and, because it was dark, she tripped over a small carpet, falling backwards.

Zoey had first walked past the closet door to her immediate right as she moved closer to the basement door. Now from the floor she could see the tall thin closet door had opened and inside there were, like Leah said, hundreds of plastic bags.

And they were creepily moving, squirming, twisting and turning as Zoey finally found the source of the “Crinkle, crinkle, crinkle” sound she’d heard.

Zoey gasped and tried to make sense of what she was seeing. She held her breath.

Leah’s gaze shifted from a still on the floor Zoey to the closet.

“Do you see it?” Zoey asked quietly, fearing that if she were loud it would make things worse.

“Yes. Do you see it, Zoey?” Leah asked, her eyes still enlarged and now her left hand extended downward toward Zoey who had begun positioning herself to stand again.

Zoey, finally to her feet, moved aside Leah and slowly gripped Leah’s hand.

But what now had the girls attention wasn’t just the sound the plastic made as the bags somehow moved on their own in a never-ending tangle of discarded plastic bags.

What caught the frightened girl’s attention was recognizing the bloody bandage that Pop from the Halloween store had discarded as she quit her job.

The bloody bandage that the girls thought was left in the trash at the costume store was in fact right in the closet the girls were staring at and it was moving. But not only moving, for as it touched other plastic bags, those bags too turned bloody as they came in contact with Pop’s bloody bag.